Approximately 40, 000 workers are employed in the NSW Mining Industry (ABS). These workers are distributed across a ranges of areas, the Hunter Valley being the most well-known. The following highlights three of these key areas in NSW. 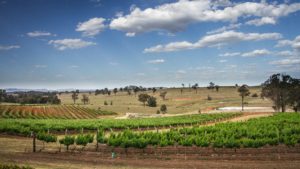 Broken Hill has been called The Silver City, the Oasis of the West, and the Capital of the Outback. Although over 1,100 km west of Sydney, the state’s capital, and surrounded by semi-desert, the town features colourful parks and offers all the regional facilities you would expect from a large regional hub. With a population of 20,000, Broken Hill is located so near the border of South Australia that it adopts the time zone of that state and gets a great deal of its local news content from Adelaide.

Broken Hill’s population has shrunk by one third since the heyday of the 1970s zinc boom, with the decrease attributed to migration from the closure and consolidation of several mining operations. In 1933 Broken Hill, with a population of 26,925, was the third largest urban incorporated area in New South Wales. Broken Hill has been and still is a town dominated by the mining industry. The mines founded on the Broken Hill Ore Deposit – the world’s richest lead-zinc ore body – have until recently provided the majority of direct employment and indirect employment in the city. The Broken Hill Proprietary Company became Australia’s largest mining company, and later became part of the world’s largest mining company, BHP Billiton.

As one of the very first original ‘mining towns’, visitors flock to the town to learn more of the history. Temperatures range from the low 30s in summer to the 20s in spring and autumn and down to 12-18c in winter. January and February, in particular, can be very hot with temperatures soaring to the mid 40s for days at a time.

With a population of 5,500, Cobar is located in central western New South Wales, some 712km northwest of Sydney. Copper was discovered in 1870, leading to settlements being founded with Australia’s European and Asian gold rush immigrant arrivals. The Great Cobar Copper Mining Company Limited was established in 1878. It and subsequent companies operated a number of light railways carrying ore and similar material, as well as timber for mine supports. Cobar and many mining outskirts accommodated the miners who travelled to the area in the late 1880s. At its peak, Cobar had a population on 10,000 and its own stock exchange. However, copper mining operations ceased in 1920, and by the 1930s the town’s population had dropped to a little over 1,000, only to rise again and stabilise at around 3,500 through the 1970s and early 1980s. In the 1980s, gold, silver, lead and zinc were discovered in the area, which led to a further population increase.

Several fine heritage buildings from the late 1880s/early 1900s settlement are still in existence, including the Great Western Hotel (1898), reputed to have the longest iron lace verandah in the Southern Hemisphere, the Cobar Court House (1887) and Court House Hotel (1895) in Barton Street, as well as the interesting Cobar Heritage and Visitor Information Centre, located in the beautiful former Mines Office (1910). On Hillston Road southeast out of town is Fort Bourke Hill which affords an excellent view of the town, and Towser’s Huts, a series of stone miners’ cottages dating possibly from as early as the 1870s.

The town’s current positive economic development is due to the affluence of the mining boom. Three important mining belts are operational in the Cobar area: The Cobar belt, the Canbelego belt and the Girilambone belt.

Many of Cobar’s 5,500 residents are associated with the local mines, and the town also provides services for outlying farms. Facilities for children include a swimming pool with water slide, a family park with three age-appropriate play areas,
plentiful community and family events and sports clubs. The centre of town is no more than a 15
minutes’ walk from every house, so shops, hotels and cafes are easily accessible. There is a community hospital, medical centre and midwifery care.

The larger centre of Dubbo which is only 300kms away, offers a wide range of services and facilities, including a cinema, large chain stores and the Western Plains Zoo. The Cobar Heritage and Visitor Information Centre overlooking the open cut mine, also offers tours for visitors. The Festival of the Miners’ Ghost, held during the last weekend in October, is a festival celebrating the spirits of the old miners.

It could be argued that there is no more enviable location to reside in the mining industry than in the Hunter Valley. Blessed with one of the world’s most renowned wine producing centres in the world, and a mere 310km from Sydney. Most of the population of 640,000 plus, lives within 25km of the New South Wales coast with 55% of the entire population living in the cities of Newcastle and Lake Macquarie. Whilst most commonly known as a premier wine growing region, its most important economic activity is coal mining through major employers such as Rio Tinto and BHP Billiton. The industry is supported by the port at Newcastle, which is one of the largest export facilities for coal in the world, most of which is initially transported via railway. Together with Queensland, NSW produced around 97% of Australia’s saleable output of black coal in 2007-2008, as well as 100% of Australia’s black coal exports. Other industry in the area include electricity generation through coal fired power stations, horse breeding (in fact, one of the largest horse breeding areas in the world), and tourism. The Hunter Valley is the 6th most visited place in Australia attracting more than 2.5 million people annually.