Half of Super Pit gold mine sells for a billion dollars

The deal with Canada’s Barrick Gold finalised in Toronto over the weekend, two months after Saracen privately entered a “competitive” sale process, and was announced to the Australian Securities Exchange on Monday morning. 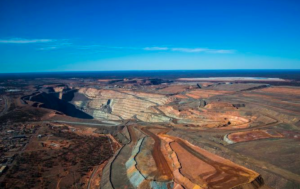 Saracen estimates it will take more than three years to recover from devastating rock falls, but insists the acquisition will pay off in the long run.

“We see this as a multi-decade asset, as it’s proven for the last three decades,” Managing Director Raleigh Finlayson said.

Mr Finlayson said the Super Pit has existing reserves of 7.3 million ounces for an estimated mine life of 12 years, and believes there will be a return to underground mining in the future.

He said exploration drilling at the southern end of the Super Pit — the results of which will be released next month — had given him renewed confidence, despite devastating rock falls in May last year.

The setback, which saw more than one million tonnes of rock slip down the eastern wall, resulted in about 30 redundancies, major changes to the mine plan, and a 32 per cent fall in production.