Australia’s biggest new gold mine is officially open, bringing with it a new golden frontier in the West Australian outback.

The $621 million Gruyere mine in the Great Victoria Desert is 650 kilometres north-east of the historic gold rush town of Kalgoorlie-Boulder. 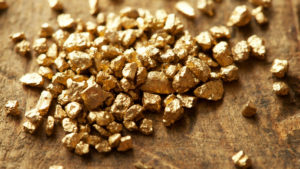 Until the deposit was discovered beneath the desert sands in October 2013, the remote region had seen very little mineral exploration and only a handful of geologists believed there was significant potential for the precious metal.

But as the open-pit mine at Gruyere has grown out of the dusty bush landscape over the past two years, so too has the hope that rich new discoveries will be made now there is the infrastructure available.

The construction phase of the Gruyere project involved building a sealed airstrip to fly in the 350-strong workforce, a new mining camp and a 200-kilometre-long gas pipeline to bring natural gas inland from WA’s north-west shelf to power the gigantic processing plant.

The mine is co-owned by Australian company Gold Road Resources, which found the deposit, and South African mining giant Gold Fields.

Gold Road’s managing director, Duncan Gibbs, said the company has been spending about $25 million on exploration this year to look for the next big find.

“We’ve made some small discoveries along the way,” he said. Read more…